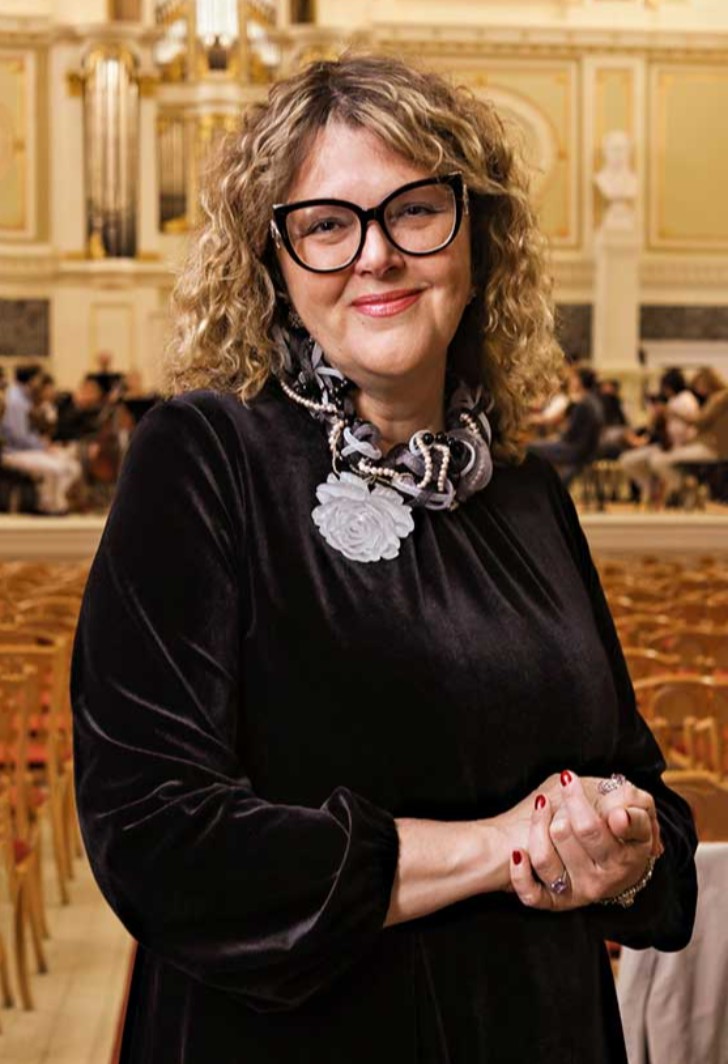 In 1985, she graduated from Cherkasov Russian State Institute of Performing Arts, Faculty of Theatre Studies, Department of Planning, Economics and Organization of Theatre Business. During her studies, she joined St. Petersburg State Academic Capella in the position of an administrator.

From 1981 to 1996, Olga Sergeevna supervised the cultural department of the House of Composers of St. Petersburg: for more than ten years she was engaged in organizing concerts, exhibitions, tours, presentations and conferences. In parallel with her work at the House of Composers, she was actively engaged in other professional projects. In 1991, she authored the idea and organized High Art concert firm for exclusive events in the palaces of St. Petersburg; in 1992, she became an art director of Nikolaevsky Folklore Center; in 1993, administrator of Metelitsa state orchestra of folk instruments; in 1994, art director of Nevsky Prospekt festival-carnival. From 1985 to 2002, she was involved in more than thirty music and theater festivals and competitions, in the roles ranging from music editor to director.

From 1996 to 2004, Olga Sergeevna was Deputy Director for Concert Work, and from 2004 to 2006, Director of Smolny Cathedral State Concert and Exhibition Hall. Since 2004, Smolny Cathedral State Concert and Exhibition Hall became part of St. Isaac’s Cathedral State Museum-Monument. During the same years Olga Khomova continued to work actively as a producer of city holidays and events; in particular, in 2000 she became the director of the “New Year 2000” – a city holiday on Vladimirskaya Square. From 2001 to 2003, she worked as the director, scriptwriter, and art director of the city’s Cake Festival on Nevsky Prospect; in 2003 and 2004, as an art director of charity events for children. From 1998 to 2003, she worked with travel companies to organize tours in St. Petersburg. Since 2003, she has been the director of Temple of Art production agency.

Olga Sergeevna has completed a number of Russian and international advanced training courses in performing arts management. In 2006, she took a professional retraining course from the North-West Academy of Public Administration.

In 2015, Olga Sergeevna was awarded the Prize of the Government of the Russian Federation in the field of culture for the creation of “Music and Word” cycle of concerts and performances.

As the general director, Olga Sergeevna contributes to strengthening of the Capella’s touring activities in Russian cities. They include: Novosibirsk, Krasnoyarsk, Tomsk, Yekaterinburg, Tyumen, Magnitogorsk, Chelyabinsk, Vologda, Cherepovets, Ryazan. Olga Sergeevna also develops the Capella’s touring activities abroad. So, in recent years St. Petersburg State Academic Capella Choir under the direction of People’s Artist of the USSR Vladislav Chernushenko has toured to France, the Netherlands, Estonia, Latvia, Lithuania, Italy, Slovenia, Slovakia, Serbia, Croatia and Spain, always with great success. During the Mass in St. Peter’s Cathedral at the Vatican, Olga Sergeevna was the representative for Russia and was assigned the mission to read a prayer for peace in Russian.

General Director of the Capella has participated in international conferences at the invitation of the Ministry of Culture of the Russian Federation as follows: a speech at the conference “Holy Brothers Cyril and Methodius and their spiritual heritage in the culture of Russia and Slovakia” in October 2016 in Slovakia, participation in the Days of Russian Spiritual Culture in France in December 2017, performance at the China International Performing Arts Exhibition in December 2017, participation in the International Tourism Exhibition in Vienna in January 2018, in the Russian-Slovene Forum and Conference in Venice in April 2018, in the Russian-Austrian Youth Creative Platform in Vienna in October 2019.

Her governmental awards are the medal “In Memory of the 300th Anniversary of St. Petersburg”, a badge for the development of cooperation with the Republic of Yakutia, the medal “For Cooperation” from the Investigative Committee of the Russian Federation.

In 2019, Olga Khomova was awarded the honorary title “Honored Worker of Culture of the Russian Federation”.